Learn more about Minitab Statistical Software
Find definitions and interpretation guidance for every statistic and graph that is provided with power and sample size for one-way ANOVA.

The significance level (denoted by alpha or α) is the maximum acceptable level of risk for rejecting the null hypothesis when the null hypothesis is true (type 1 error). For example, if you perform a one-way ANOVA using the default hypotheses, an α of 0.05 indicates a 5% risk of concluding that a difference exists when a difference does not actually exist.

The standard deviation is the most common measure of dispersion, or how much the data vary relative to the mean. Variation that is random or natural to a process is often referred to as noise.

For example, the following results show that increasing the sample size decreases the maximum difference that can be detected at a specified power:

To more fully investigate the relationship between the sample size and the difference that you can detect, use the power curve.

The power of a one-way ANOVA is the probability that the test will determine that the maximum difference between group means is statistically significant, when that difference truly exists.

The power curve plots the power of the test versus the maximum difference between the smallest mean and the largest mean.

Use the power curve to assess the appropriate sample size or power for your test.

The power curve represents every combination of power and the maximum difference for each sample size when the significant level and the standard deviation are held constant. Each symbol on the power curve represents a calculated value based on the values that you enter for two properties. For example, if you enter a sample size and a power value, Minitab calculates the corresponding maximum difference and displays the value on the graph.

Examine the values on the curve to determine the maximum difference that the test can detect at a specific power and sample size. A power value of 0.9 is usually considered adequate. However, some practitioners consider a power value of 0.8 to be adequate. If a one-way ANOVA has low power, you might fail to detect a difference between the smallest mean and the largest mean when one truly exists. 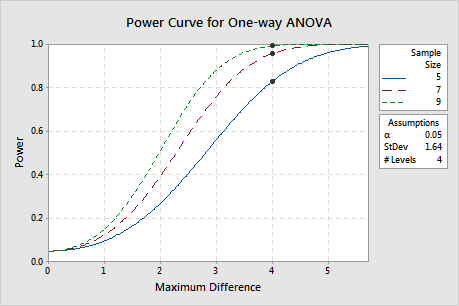 The sample size is the total number of observations in the sample.

If you enter the power and the maximum difference, Minitab calculates how large your sample must be. Sample size refers to the number of observations in each group. Because sample sizes are whole numbers, the actual power of the test might be slightly greater than the power value that you specify.