What is a Z-value?

The Z-value is a test statistic for Z-tests that measures the difference between an observed statistic and its hypothesized population parameter in units of the standard deviation. For example, a selection of factory molds has a mean depth of 10cm and a standard deviation of 1 cm. A mold with a depth of 12 cm has a Z-value of 2, because its depth is two standard deviations greater than the mean. The vertical line represents this observation, and its location relative to the entire population: 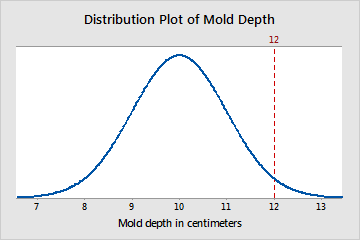 For example, you want to know whether a second group of molds also has a mean depth of 10cm. You measure the depth of each mold in the second group, and calculate the group's mean depth. A 1-sample Z-test calculates a Z-value of −1.03. You choose an α of 0.05, which results in a critical value of 1.96. Because the absolute value of the Z-value is less than 1.96, you fail to reject the null hypothesis and cannot conclude that the mold's mean depth is different from 10cm.

Copyright © 2023 Minitab, LLC. All rights Reserved.
By using this site you agree to the use of cookies for analytics and personalized content.  Read our policy
OK