Boxplot of responses by terminal node for CART® Regression

Learn more about Minitab Statistical Software
The boxplots provide a graphical summary of the distribution of the response variable in each terminal node. Use the boxplots to compare the shape, the central tendency, and the variability of the nodes. Boxplots are better visual representations of the response values when the number of cases in a terminal node is greater than 20.

By default, the nodes are in order from least error to greatest error. When you run the analysis, you can find an option to sort the nodes by identification number by pressing the Graphs button.

When the analysis uses a test data set, the graph includes separate boxplots for the training and test data. The performance of the tree on the test data is a typically a better representation of how the tree performs for new data. You should investigate large differences between the test and training data. 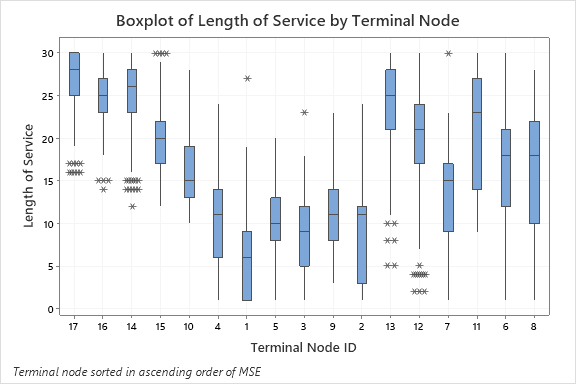