A development team for a metal parts supplier plans a designed experiment to study a new part for a motor. Before conducting the experiment, the team wants to ensure that they have enough resources to do an experiment with enough power. The team plans to examine three external coatings and three alloys on the corrosion resistance of the new part. The team wants their design to have 90% power to detect a difference of 0.4 between the best and worst factor levels. The estimated standard deviation is 0.15. If the design requires more than 1 replicate, then the team wants to use a separate block of experimental runs for each replicate.

Because the team considered one value for power and one value for maximum difference, the solution includes one value for the number of replicates. A design with 2 replicates and 18 experimental runs has a power greater than 90%, which meets the team's requirements. The power curve shows the relationship between power and the size of the maximum difference. The symbol on the curve represents the effect size of 0.4 that the team specified. The team decides that they have enough resources for 18 experimental runs. 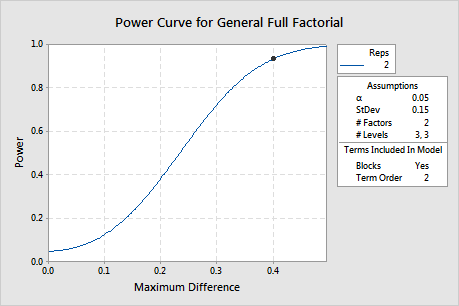 General Full Factorial Design α = 0.05 Assumed standard deviation = 0.15 Factors: 2 Number of levels: 3, 3 Include terms in the model up through order: 2 Include blocks in model.
Results Maximum Total Target Difference Reps Runs Power Actual Power 0.4 2 18 0.9 0.930521
Copyright © 2021 Minitab, LLC. All rights Reserved.
By using this site you agree to the use of cookies for analytics and personalized content.  Read our policy
OK