Complete separation occurs when a linear combination of the predictors yield a perfect prediction of the response variable. For example, in the following data set if X ≤ 4 then Y = 0. If X > 4 then Y = 1. 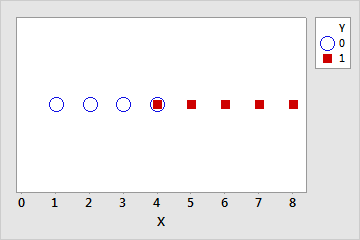 Often, separation occurs when the data set is too small to observe events with low probabilities. The more predictors are in the model, the more likely separation is to occur because the individual groups in the data have smaller sample sizes.

Although Minitab prints a warning when it detects separation, the more predictors are in the model the more difficult the identification of the cause of the separation is. The inclusion of interaction terms in the model makes the difficulty even greater.

When the maximum likelihood estimates fail to converge because of separation, consider the following 5 strategies:

For more information about separation, please refer to Albert and J. A. Anderson (1984) "On the existence of maximum likelihood estimates in logistic regression models" Biometrika 71, 1, 1–10.