In this plot, cross-validation was not used to select the components. Minitab fits the default 10 components and displays the R2 values for each model on the plot. 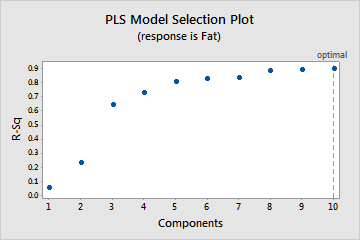 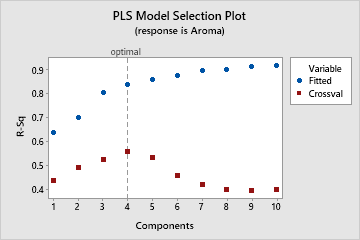 Use this plot to determine how well your model fits and predicts each observation. When examining this plot, look for the following things:

A model with excellent predictive capability usually has a slope of 1 and intersects the y-axis at 0. 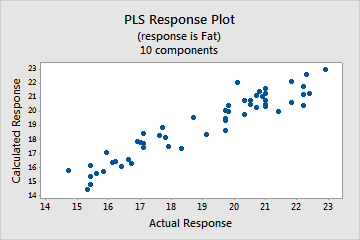 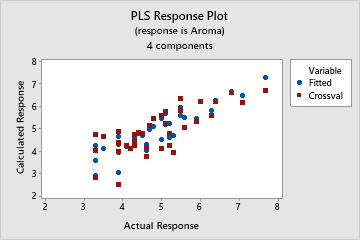 Use the coefficient plot, along with the output of regression coefficients to compare the sign and magnitude of the coefficients for each predictor. The plot makes it easier to quickly identify predictors that are more or less important in the model.

In this plot, the predictors (spectral data) are on the same scale. The plot indicates that wavelengths 1 - 40 have the greatest influence on the responses. 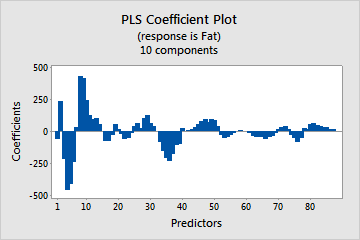 Use this plot, along with the output of regression coefficients to compare the sign and magnitude of the coefficients for each predictor. The plot makes it easier to quickly identify predictors that are more or less important in the model.

Because the plot displays standardized coefficients, you can make comparisons among the magnitude of the relationships between predictors and the response even if your predictors are not on the same scale.

If your predictors are on the same scale, the pattern of coefficients in standardized and unstandardized plots look similar. These plots may not look identical, though, because the predictors are highly correlated, causing the coefficients to be unstable and because of differences between sample standard deviations and population standard deviations. 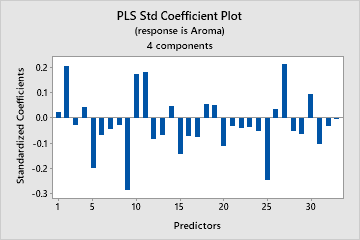 In this plot, none of the points look like extreme outliers or leverage points.

Use the histogram of the residuals to determine whether the data are skewed or include outliers. The patterns in the following table may indicate that the model does not meet the model assumptions.

Because the appearance of a histogram depends on the number of intervals used to group the data, don't use a histogram to assess the normality of the residuals. Instead, use a normal probability plot. A histogram is most effective when you have approximately 20 or more data points. If the sample is too small, then each bar on the histogram does not contain enough data points to reliably show skewness or outliers.

This histogram of the standardized residuals reveals a bell-shaped, symmetric pattern, indicating the residuals are not skewed and there are no outliers. 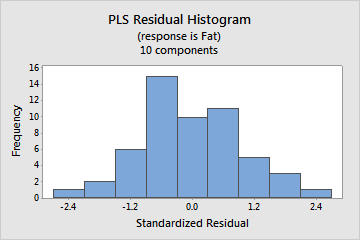 The normal probability plot of the residuals displays the standardized residuals versus their expected values when the distribution is normal.

The following patterns violate the assumption that the residuals are normally distributed.

If you see a nonnormal pattern, use the other residual plots to check for other problems with the model, such as missing terms or a time order effect. If the residuals do not follow a normal distribution, the confidence intervals and p-values can be inaccurate.

The residuals versus fits graph plots the standardized residuals on the y-axis and the fitted values on the x-axis.

The patterns in the following table may indicate that the model does not meet the model assumptions.
The following graphs show an outlier and a violation of the assumption that the variance of the residuals is constant.

The residual versus leverage plot is a scatterplot of the standardized residuals versus the leverage of each observations. 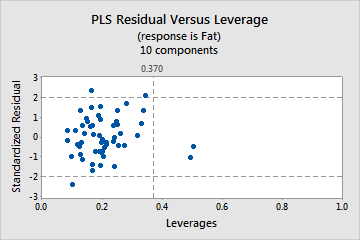 The residuals versus order plot displays the standardized residuals in the order that the data were collected.

If you see a pattern, investigate the cause. The following types of patterns may indicate that the residuals are dependent.

The score plot is a scatterplot of the x-scores from the first and second components in the model.

When examining this plot, look for the following things:
In this plot, brushing the score plot reveals that soybean samples 36, 38, 40, 41, and 42 in the bottom quadrants may have high leverage values. Several of these samples have appeared as outliers or leverage points on other plots. Because the first two components describe 99% of the variance in the predictors, this plot adequately represents the data. 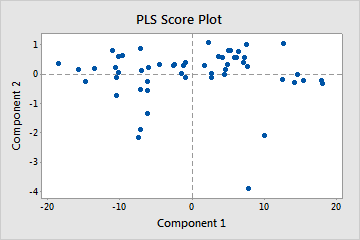 If your model contains more than 2 components, you may want to plot the x-scores of other components using a Scatterplot. To do this, store the x-score matrix and then copy the matrix into columns using Data > Copy > Matrix to Columns. If your model has only one component, this plot does not appear in your output.

The 3D score plot is a three-dimensional scatterplot of the x-scores from the first, second, and third components in the model. If the first three components explain most of the variance in the predictors, then the configuration of the points on this plot closely reflects the original multidimensional configuration of your data. To check how much variance the model explains, examine the x-variance values in the Model Selection and Validation table. If the x-variance value is high, then the model explains significance variance in the predictors.

When examining the 3D score plot, look for the following things:

You should also use the 3D graph tools, which allow you to rotate the plot so you can view it from different perspectives. This will give you a more complete picture of your data and allow you to more accurately identify leverage points and clusters of points.

By rotating this 3D score plot, it appears that soybean sample 42 may be a leverage point because of its extreme score for the second component. Sample 42 was identified as a potential leverage point on other plots. 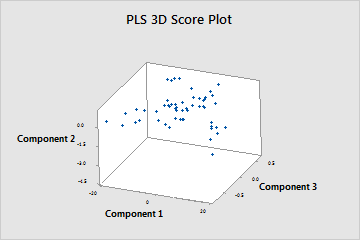 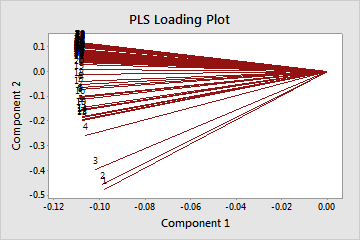 If your model contains more than 2 components, you may want to plot the x-loadings of other components using a Scatterplot. To do this, store the x-loading matrix and then copy the matrix into columns using Data > Copy > Matrix to Columns.

The residual X plot is a line plot of the x-residuals versus the predictors. Each line represents an observation and has as many points as it has predictors.

Use the x-residual matrix plot to identify observations or predictors that the model describes poorly. This plot is most useful with predictors that are on the same scale.

Ideally, the lines on the plot should be close together and near zero.

Use the x-residual matrix plot to examine general patterns in the residuals and identify areas where problems exist. Then, examine the x-residuals displayed in the output to determine which observations and predictors the model describes poorly.

This residual X plot shows that the residuals are close to zero, which indicates that the model describes most of the variance in the predictors. With such small x-residual values, you cannot detect observations or predictors that the model does not describe well. 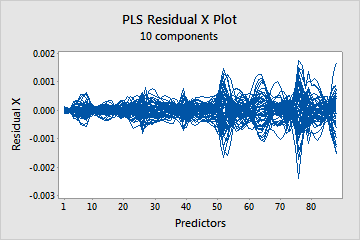 The calculated X plot is a line plot of the x-calculated values versus the predictors. Each line represents an observation and has as many points as it has predictors.

The calculated X plot complements the x-residual plot. The sum of both plots results in a plot of the original predictor values. A predictor with x-calculated values that are much smaller or larger than the original x-values is not well described by the model.

In this plot, most of the x-calculated values are very close to the original predictor values, indicating that the model describes most of the variance in the predictors. 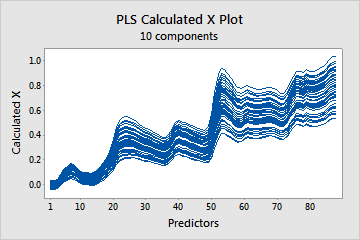