Evaluate how well the model fits your data and whether the model meets your goals. Examine the fitted line plot to determine whether the following criteria are met:

The regression equation with more than one term takes the following form:

In the regression equation, the letters represent the following:

A regression coefficient describes the size and direction of the relationship between a predictor and the response variable. Coefficients are the numbers by which the values of the term are multiplied in a regression equation.

The confidence interval for the fit provides a range of likely values for the mean response given the specified settings of the predictors.

Use the confidence interval to assess the estimate of the fitted value for the observed values of the variables.

The prediction interval is a range that is likely to contain a single future response for a value of the predictor variable.

With 95% prediction bands, you can be 95% confident that new observations will fall within the interval indicated by the purple lines. (Note, however, that this is only true for density values that are within the range included in the analysis.) 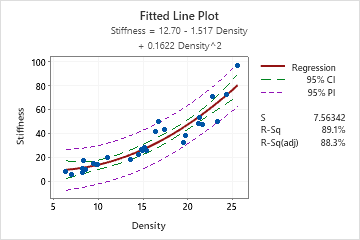