Step 2: Determine how well the model fits your data

Use S to assess how well the model describes the response. Use S instead of the R2 statistics to compare the fit of models that have no constant.

S is measured in the units of the response variable and represents how far the data values fall from the fitted values. The lower the value of S, the better the model describes the response. However, a low S value by itself does not indicate that the model meets the model assumptions. You should check the residual plots to verify the assumptions.

Consider the following points when you interpret the R2 values:

Step 3: Determine whether your model meets the assumptions of the analysis

The patterns in the following table may indicate that the model does not meet the model assumptions.
In this residuals versus fits plot, the data appear to be randomly distributed about zero. There is no evidence that the value of the residual depends on the fitted value. 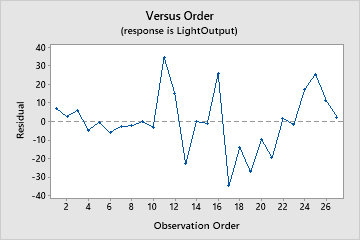 The patterns in the following table may indicate that the model does not meet the model assumptions.
In this normal probability plot, the points generally follow a straight line. There is no evidence of nonnormality, outliers, or unidentified variables.