Step 1: Determine whether the proportion of defective items is in control

Red points indicate subgroups that fail at least one of the tests for special causes and are not in control. If the same point fails multiple tests, then the point is labeled with the lowest test number to avoid cluttering the graph. If the chart shows out-of-control points, investigate those points.

Out-of-control points can influence the estimates of process parameters and prevent control limits from truly representing your process. If out-of-control points are due to special causes, then consider omitting these points from the calculations. For more information, go to Specify subgroups to estimate parameters for Laney P' Chart.

Consider the following example of a Laney P' chart. The Sigma Z value (approximately 2.2) is greater than 1, which indicates that the control limits on the Laney P' chart are wider than those on a traditional P chart to adjust for overdispersion. The proportion of defectives for subgroup 31 is out of control. When you hold the pointer over a red point, you can get more information about the subgroup. You should identify any special causes that may contribute to the unusually high proportion of defective items for that subgroup. 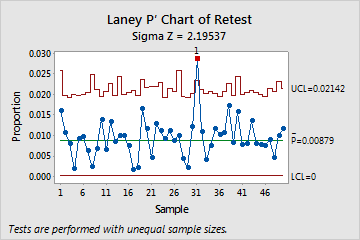 TEST 1. One point more than 3.00 standard deviations from center line. Test Failed at points: 31 * WARNING * If graph is updated with new data, the results above may no longer be correct.