The number of records is high, with an average subgroup size of more than 2500. The data exhibit a large amount of overdispersion. So the supervisor decides to use a Laney P' chart instead of a traditional P chart to monitor patient records.

Because the sample sizes are unequal, the control limits vary. The Sigma Z value (approximately 1.7) is greater than 1, which indicates that the control limits on the Laney P' chart are wider than those on a traditional P chart to adjust for overdispersion. None of the subgroups failed the tests for special causes, so the supervisor concludes that proportion of defectives is in control. 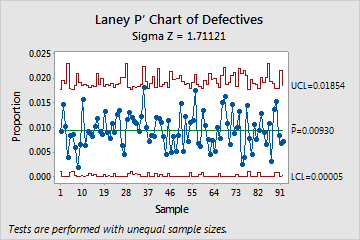