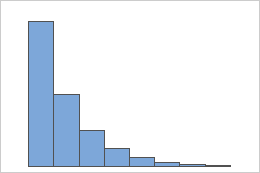 An important property of the geometric distribution is that it is memoryless. The chance of an event does not depend on past trials. Therefore, the occurrence rate remains constant.