Example of a scatterplot with regression and groups

As part of the initial investigation, the engineer creates a scatterplot of volts remaining after a flash versus flash recovery time, grouped by battery formulation, to assess the relationship between the two variables for the two formulations. 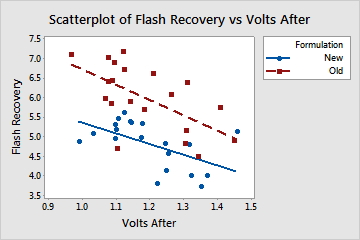