Interpret the key results for Histogram

Examine the peaks and spread of the distribution. Assess how the sample size may affect the appearance of the histogram.

Identify the peaks, which are the tallest clusters of bars. The peaks represent the most common values. Assess the spread of your sample to understand how much your data varies.

For example, in this histogram of customer wait times, the peak of the data occurs at about 6 minutes. The data spread is from about 2 minutes to 12 minutes. 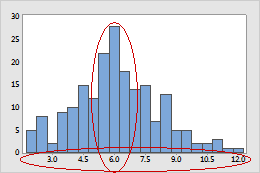 The sample size can affect the appearance of the graph.

For example, although these histograms seem quite different, both of them were created using randomly selected samples of data from the same population.

Step 2: Look for indicators of nonnormal or unusual data

Skewed data and multi-modal data indicate that data may be nonnormal. Outliers may indicate other conditions in your data.

When data are skewed, the majority of the data are located on the high or low side of the graph. Skewness indicates that the data may not be normally distributed.

If you know that your data are not naturally skewed, investigate possible causes. If you want to analyze severely skewed data, read the data considerations topic for the analysis to make sure that you can use data that are not normal.

Outliers, which are data values that are far away from other data values, can strongly affect your results. Often, outliers are easiest to identify on a boxplot.

On a histogram, isolated bars at the ends identify outliers.

Try to identify the cause of any outliers. Correct any data entry or measurement errors. Consider removing data values that are associated with abnormal, one-time events (special causes). Then, repeat the analysis.

For example, these histograms are graphs of the same data. The simple histogram has two peaks, but it is not clear what the peaks mean. The histogram with groups shows that the peaks correspond to two groups.

To add a group variable to an existing graph, double-click a data representation in the graph and then click the Groups tab.

Step 3: Assess the fit of a distribution

For information on how to specify different distributions and parameters, go to Fitted distribution lines.

For a more precise measurement of the distribution fit, use a probability plot to check the fit for statistical significance.

If your histogram has groups, assess and compare the center and spread of groups.

Look for differences between the centers of the groups.

For example, these histograms show the completion time for three versions of a credit card application. The center for each version of the credit card application is in a different location. The differences in the locations indicate that the mean completion times are different.
To determine whether a difference in means is statistically significant, do one of the following:

Look for differences between the spreads of the groups.

For example, these histograms show the weights of jars that were filled by three machines. Although the histograms have almost the same center, some histograms are wider and more spread out. The wider spread indicates that those machines fill jars less consistently.
To determine whether a difference in spread (variance) is statistically significant, do one of the following:
Copyright © 2021 Minitab, LLC. All rights Reserved.
By using this site you agree to the use of cookies for analytics and personalized content.  Read our policy
OK