Learn more about Minitab Statistical Software
This topic is about categorical graph scales, such as the x-axis on a bar chart. For information on other scale types, click one of the following links.

Graph scale elements are axis lines, axis labels, tick marks, and tick labels. You can display these elements on the high side or the low side of the graph's data region. 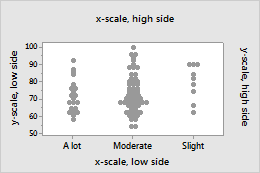 To specify which elements to include when you create a graph, click Scale, then select the elements on the Axes and Ticks tab. To change or add the elements on an existing graph, use the following steps:

Transpose the value scale and the category scale

To transpose the x- and y- scales when you create a graph, click Scale, then select Transpose value and category scales on the Axes and Ticks tab. To transpose scales on an existing graph, use the following steps:

Innermost and outermost scales on a graph

Minitab uses the terms "innermost" and "outermost" to indicate the relative position of the scales for multiple levels of groups displayed on a graph.

Outermost is also sometimes referred to as Level 1. The scale directly above the Level 1 scale is the Level 2 scale, and so on.

Remove some of the innermost category labels 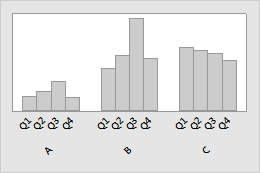 To remove some of the innermost labels, in order to make the display less crowded, use the following steps:
For example, on the first bar chart below, The Tick increment is set to 2 so that every other tick mark is displayed. On the second bar chart, the Tick start is set to 2, so that the labels start with the second tick mark instead of the first.

Change the space between the groups

Include empty groups on the scale

(This option is available only with multiple level categorical scales.) By default, Minitab includes all possible groups on a graph, even if there are no data for a group. To exclude empty cells on the scale or the legend of an existing graph, use the following steps:
For example, the following bar chart includes a tick mark for group A2, but no bar. A2 is an empty cell because there are no rows in the worksheet that contain an A in column C1 and a 2 in column C2.

To specify custom text for tick mark labels and axis labels on a scale that includes multiple levels, use the following steps:
For example, the levels of Activity are coded in the worksheet as the values, 1, 2, and 3. The custom tick mark labels in the second graph are more descriptive than the default tick marks.

You can also use Data > Recode to change coded values in the worksheet to values that are more descriptive. For more information, go to Overview for Recode.

Same scale range for all panels

(Matrix plot only)
Copyright © 2021 Minitab, LLC. All rights Reserved.
By using this site you agree to the use of cookies for analytics and personalized content.  Read our policy
OK